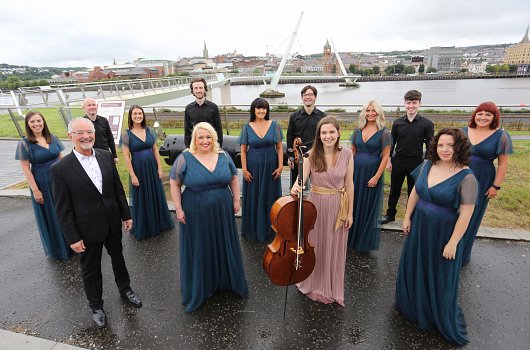 Derry City is warming up for the sensational return of the City of Derry International Choir Festival (CoDICF) in October when an unrivalled programme of events – including Grammy award-winners and exclusive global premier performances – will fill halls, churches and homes with world class, choral entertainment.

Celebrating its ninth successful year, the Festival has been carefully planned to include a synchronised mix of in-person and virtual events throughout the city as part of an immersive programme of live and digital concerts, performances, workshops, podcasts, and other events.

Over five full days, audiences will experience the elation of live music once again with a variety of exciting performances in various venues across the city, including the historic St Columb’s Cathedral, and the inspiring surroundings of the centuries-old St Columba’s Church, Long Tower.

This year’s Festival kicks off with the Opening Gala Concert on Wednesday 20 October featuring members of the Ulster Orchestra with local choirs and singers performing The Voyage. Composed and conducted by world-famous choral director Bob Chilcott, The Voyage is a deeply emotive orchestral and vocal composition depicting the voyage through life and how we come to terms with the challenges it brings.

Thursday 21 October marks the return of the award-winning Derry chamber choir Codetta, promising to be a major highlight for the 2021 programme as they perform The Road Home in Long Tower Church with Derry cellist Kim Vaughan.

School performances will be back with a non-competitive format for primary years encouraging children and teachers to take part in the fun and community-spirited Primary Big Sing event in Millennium Forum on Thursday 21 October.

This day of singing will include a workshop led by music education expert Lucinda Geoghegan ​featuring songs, games and rhymes, ​and a specially composed piece for young voices by leading Catalan composer and conductor, Josep Vila i Casañas. Post-primary schools will return for a day of competitions and a senior Big Sing on Friday 22 October.

The Festival is also hopeful that choirs throughout the island of Ireland will return for a day of competitions in various categories including mixed voice, equal voice, youth, sacred, pop, jazz and gospel, culminating in the brand-new Choir of the Festival competition.

Friday 22 October the Festival welcomes a return visit from the UK vocal ensemble Tenebrae for a live performance in St Columb’s Cathedral. The critically acclaimed, award-winning choir is one of the world’s leading vocal ensembles famous for its passion and precision, led by its musical director and founder, Nigel Short.

The Festival’s online programme features this year’s headline virtual act, the Grammy award-winning all-male a cappella ensemble Chanticleer from San Francisco, California. They will be making their virtual debut at the Festival on Thursday 21 October with a live Zoom workshop and a bespoke recorded concert.

Renowned internationally as ‘the orchestra of voices,’ Chanticleer was founded in 1978 and remain as the ‘world’s reigning male chorus,’ performing stunning concerts to every corner of the world.

The Virtual Choral Trail returns with the inclusion of local, national and international choirs. Following a hugely successful online-only festival last year, which generated an unprecedented 250,000 views from 50 countries worldwide, choirs and ensembles can take part by submitting their best performance through the Festival website to secure their place in the 2021 online programme.

Online audiences will also enjoy the sounds of previous international winners of the Festival in a special virtual concert, as well as a series of podcasts with guest artists and a virtual symposium on the theme of words, music and composition.

“There is a real sense of hope among singers everywhere that we will soon be able to return to regular rehearsals and performances. Singing together is our life-blood and this shared experience has been sorely missed over the past 18 months. We cannot wait to perform together again, or to enjoy the performance of other groups, whether outdoors or in one of the beautiful indoor venues that we’ll be using for this year’s festival.”

Dónal shares how in-person and virtual events has created a new dynamic to the festival’s programme:

“The extraordinary success of last year’s virtual festival has given us the confidence to present an exciting and varied programme for Festival 2021. Derry is a very welcoming city and we look forward to an even bigger global audience, either in person or online, being able to share in and enjoy this year’s five-day celebration of song.”